A half a century after the foundation of the Sisters of St Joseph in Tasmania, they opened a school and convent in Geeveston. The Parish Priest at the time, Fr P Sherry, believed that the time had come for a school in the southern end of the Parish and set about making this happen. Fr Julian Tension-Woods, co-founder of the Sisters of St Joseph, had often frequented the area carrying out missions and the Catholic faith was steadily spreading throughout the Huon Valley and the population of the area was also steadily increasing.

The first community of Sisters, Sisters M. Eustelle, M. Marcellus and M. Agnes, came to take up residence in February 1938. Unfortunately the Geeveston buildings were not complete so the Sisters stayed at Franklin Convent, nine miles north, and traveled to and from the school each day. They traveled in a trap chauffeured by Mr. F.B. Hill and drawn by his faithful 23 year old horse Clusky. Lessons were held in the Church with the Sisters teaching down one end and music teacher taking lessons down the other end. During the first few months the school had to close twice due to outbreaks of polio in the area but eventually got underway on 20 April with 47 students on the register, though anecdotal evidence puts the number at 50. In June, the new buildings were completed and the Sisters moved their convent and students into their classrooms. The official opening and blessing took place on 11 August with Archbishop Simonds presiding with the school being named St Theresa’s Convent School.

In 1962 it was decided to close the secondary classes at Franklin and have the students transported to Geeveston each day. In the same year it was arranged to have Dover children transported as well. Both moves proved successful and these developments were made possible by the conveyance allowances paid by the Education Department. Over the years there were a number of religious vocations from the school with five girls entering the convent and one boy entering the priesthood.

The school celebrated its Silver Jubilee in 1963 with a school ball, a debutante ball and a Jubilee Mass of Thanksgiving.

By 1971, dwindling numbers led to the closure of the secondary school annex. Further rationalisation occurred in 1973 when the policy of transporting students from other areas was cemented with the closure of St Mary’s at Franklin.

In 1979 a new administration complex was built.

In 1981 the Sisters handed over the running of the school to lay administration. Sr Maria Goretti was the last sister from the school to live in the convent at Geeveston in 1983, together with Sr M Brendan Keogh before moving their living accommodation back to their original but newly renovated Convent at Franklin in order to leave their Geeveston house for development by the School. Sr Gwendoline (Gwen) Dooley was the last sister to teach at Sacred Heart, Geeveston. Sr Gwen was teaching at the Geeveston school until the end of 1991 while living at Franklin.

In 1991 the School had 190 students. In the 1990s the current infant block was extended out onto the asphalt area in order to increase the size of the classrooms and enable wet areas and cloakrooms to be installed. After lengthy community consultation, our Kindergarten was opened in 2004 with the first year having 26 students.

During the period 1996-2008 all the wooden playgrounds were replaced with a variety of modern equipment including a fitness track and equipment for older children.

2007 saw the completion of two much longed-for improvements at the School. These were a complex consisting of a multi-purpose hall, student toilets, uniform shop, canteen, sports store and utility officer workshed, and a new administration block with offices, meeting rooms, sick bay, staff room and staff toilets as well as an area for teacher resources.

In 2008 the school celebrated its seventieth anniversary. As part of the celebration the school commissioned a local Artist, Mr Bernie Tarr to sculpt a King Billy Pine statue of a Sister of St Joseph with three children around her. The carving, ‘The Sister’ is a daily visual reminder of the school’s commitment to being faithful to the charism of its founding order. We were lucky enough to have four ex students and Sisters of Saint Joseph, Sr Jillian Dance, Sr Joan Cowmeadow, Sr Patricia Dance and Sr Helen Hickey present for the unveiling and have a photo taken with Mr Tarr and The Sister.

In 2010 the school received considerable funds from the Federal Government under the ‘Building Education Revolution’ program. After being successful in the first round of the BER funding the Sacred Heart Catholic School Board quickly began a consultation process with the School and local community. The vision was to construct a facility that would promote active, student-centred learning for all students through the creation of flexible functional spaces that support contemporary learning and teaching practices. The funding also allowed the Kindergarten to Grade 4 learning spaces to be fully refurbished. The building project was completed by December 2010.

In 2013 Sacred Heart celebrated its seventy-fifth anniversary with Mass being celebrated by our Parish Priest, Fr Greg Barker. The original foundation stone from the convent was restored and placed in its new location, By Mr Neville Burgess, in recognition of his long association with our school for over 50 years, firstly as a student and more recently as a much loved employee.

From 2014 to the present time the school has used its extensive bushland to establish and excellent Sustainability program and further enhance its commitment to Aboriginal education. A team teaching approach to student learning has been further developed to cater to the diverse needs of our student cohort. An innovative Literacy Program has been the school’s main priority in recent years along with great success, along with a strong focus on student health and well-being.

Click here to download information about the amazing history of Sr Tess Ransom, her family and the connection to Fr Julian

Up until 2013 the Ransom family still had children attending Sacred Heart Catholic School. 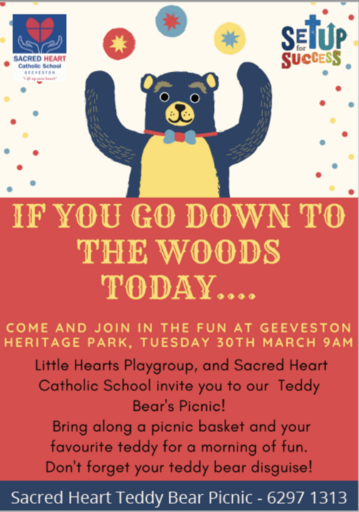 Relief Teachers Wanted click the link to see the Ad

BACK TO SCHOOL INFORMATION 2021

Welcome to the 2021 school year, and a very special welcome to our new families, students and staff who are joining us this year. I hope that you have had a wonderful Christmas with your family and that the school holidays have been enjoyable. I write to provide you with some important information that you might find useful for the beginning of the school year.

Term 1 commences on Monday, 1st February. To help us organise bus transport for students to/from school, we are asking ALL families to complete this form whether your child is catching school buses or being transported by car.
Please take a few moments to fill in this form and submit it to us by no later than next Wednesday, 27th January.

Announcement of Kinder Teacher from 2021